Music production is all digital these days. Hardly anyone uses multi-track tape decks, with the possible exception of one or two teenagers who found dad’s old tape deck in a corner of the basement. Everyone else uses high-powered desktop and laptop computers equipped with digital audio workstations (DAWs) and MIDI software. And under the hood, so to speak, are hundreds of plugins producers rely on to create a unique sound.

Plugins are essentially small pieces of software dedicated to a single function. Most of us are familiar with them in relation to web browsers, though we call browser plugins extensions these days. But plugins are still called plugins in the music production world. And there are four that every home music producer and musician need.

These days, you don’t need a hardware compressor. The compressor plugin does the exact same thing right on your computer. Most compressor plugins allow you to control nearly every aspect of the compressed signal. Most also allow for presets. This lets you create different configurations for different instruments, styles of music, etc.

The normalize function increases the overall volume of a piece of music in order to achieve what is considered a normal level. At baseline, the normal volume is represented as 0 dB by most plugins. That does not mean the processed signal will be muted, it simply means that it will not be any higher or lower than the baseline volume programmed into the plugin.

The value of the normalize plugin is fully understood when you arrange multiple songs on a single release media. You want all the songs to play at roughly the same volume. That is what normalization does.

Next up is the reverb plugin. Reverb is in effect that makes a piece of music sound as though it is being played in a space with at least some echo. According to the engineers at Supreme Tracks in New York City, reverb is one of the most important plugins for digital music processing. However, it is also one of the hardest to master. Supreme Tracks recently published a blog post discussing this very topic.

At any rate, reverb is one way of adding body to vocals. But it is not the only way. You can also add body with the fourth and final plugin on this list: the chorus plugin.

The chorus effect was originally developed in order to mimic the sound of multiple vocals using just one recorded voice. But as legendary music producer Bob Crewe discovered with Frankie Valli back in the sixties, the effect can make a single voice sound incredibly dynamic.

The chorus plugin is notoriously tricky to master for the simple fact that minor adjustments can make a major difference. It takes a lot of practice to get the effect just right. But nail it and your vocals will come alive.

Plugins are a big part of digital audio production. Without them, digital music would not sound nearly as good as it does. If you are into home music production, make sure your software has at least the four plugins discussed in this post. Most do, so that’s good. 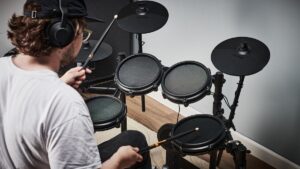 How to Choose a Drum Kit

How to Choose a Royalty Free Music Subscription